India vs Australia: Shane Warne says hosts will blow away Ajinkya Rahane and Co at MCG

It was just after Naomi Osaka had won her semi-final at the recently-concluded Australian Open that Justine Henin, one of the experts on Eurosport for the season-opening Grand Slam, proclaimed that women’s tennis had found its new boss. It might have seemed premature, considering the final was still to be played. But the seven-time Grand Slam champion was steadfast in her belief. “To me, women’s tennis has a new boss. Naomi Osaka has this capacity, she has taken another dimension,” said Henin.

As if to validate the former Belgian tennis star’s conviction, Osaka won her fourth Slam title at Melbourne Park on Saturday.

For long, women’s tennis has yearned for a champion to take the tour by the scruff of its neck, to not be a one-off success or someone who could win more than three titles. Serena Williams, who Osaka beat in the semi-finals, had made winning Slams a habit and it gave an impression that it was easy. Not even in the slightest.

But what makes Osaka’s feat this year even more remarkable is that by taking her tally to four, she’s highlighted her mental fortitude coupled with incredible progress in her tennis. She’s come through from being two match points down, facing a stiff draw, a semi-final against her idol, and a final against arguably the second best women’s player on hard courts presently. The 2018 US Open, her first major, was her breakthrough. The fact that it came against Serena in the final, in a controversial match where the American called the chair umpire “a thief”, just took up the feat a notch. She became the first Japanese player to win a Grand Slam and the youngest US Open champion since 2006. 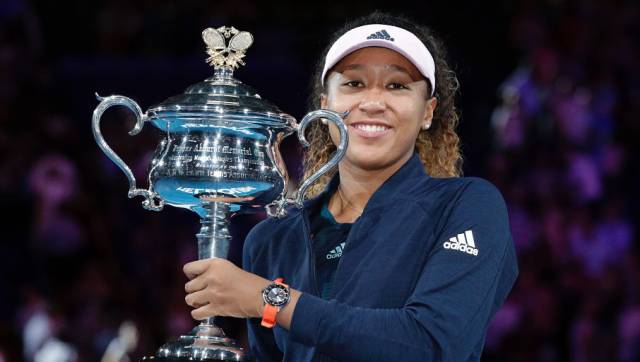 The challenge with women’s tennis in the past decade had been in players not taking their success forward. Francesca Schiavone, Sam Stosur, Marion Bartoli, Flavia Pennetta, Jelena Ostapenko, Sloane Stephens, Caroline Wozniacki, Ashleigh Barty, Bianca Andreescu, Sofia Kenin and Iga Swiatek are all one-time champions. The challenge ahead of them is to prove that it’s not a one-off title. Osaka, coming into the 2019 Australian Open, had the same task.

Not only did Naomi win the Australian Open, but much like this year, she came through some tough matches. She needed a trio of three-set matches before playing a nail-biter against Petra Kvitova in the final. She thus became the youngest woman to win back-to-back majors since Martina Hingis in 1998. In 2020, the world of tennis was a different place. The coronavirus pandemic hampered the season after February; and off the court, the conversation became political in the US as police brutality came to the fore. Osaka, of Japanese and Haitian heritage but a US resident since 2006, won praise for her support for the Black Lives Matter movement. She wore a different mask in each round to honour victims of racial inequality and police brutality.

She came from 1-6, 0-2 down in the final against Victoria Azarenka to win inside an empty Arthur Ashe Stadium. The 23-year-old planned on highlighting seven different names at the tournament, and she did what she aspired to do.

“Honestly, for me, when everything happened in New York, I got really scared because I felt like it put me into this light that was a non-athletic light that I’ve never been in before,” she said after beating Jennifer Brady in the Australian Open final.

“So I feel like there is a lot of topics that people suddenly started asking me about that I completely didn’t know about at all. For me, I only like to talk when I’m knowledgeable about the subject or at least know, like, one tiny grain of what I’m about to start talking about,” she added.

At Melbourne Park, under strict COVID-19 restrictions, fans made a return. Players flew in from all over and fought it out with their own quarantine restrictions as well. Osaka, meanwhile, took her unbeaten tally to 21 matches, served the most aces among the women and returned remarkably well — an aspect she claimed was her goal.

“So for me I came into this tournament just thinking purely about tennis.”

And by going 4-0 in Grand Slam finals, remaining flawless in the second week of majors, coming out victorious in a tough draw, just speaks volumes of what she is capable of doing and how many she can inspire. Asked what’s next for her, what does she want to achieve that she hasn’t already and Osaka had a surprising answer.

“I feel like the biggest thing that I want to achieve is — this is going to sound really odd — hopefully I play long enough to play a girl that said that I was once her favourite player or something. For me, I think that’s the coolest thing that could ever happen to me. I think I have those feelings of, you know, watching my favourite players. Unfortunately I didn’t get to play Li Na, but, yeah, I just think that that’s how the sport moves forward.”