In the end, the ‘new normal’ turned out to be the ‘old normal’ at the Australian Open 2021. Novak Djokovic and Naomi Osaka lived up to their billing of being the tournament favorites by capturing the men’s and women’s titles. However, the two are a study in contrast in almost everything and had very different journeys to their titles.

While Djokovic is still considered the ‘old guard’ of men’s tennis and is holding on to that bastion with Rafael Nadal and Roger Federer, Naomi Osaka has shown that the ‘old order changeth’ in the women’s event. He is undoubtedly the king of Melbourne and she was the ‘queen in waiting’ who has now staked claim to the throne as well. He is the undisputed world number 1 and by the looks of it, will continue to hold that position, while she is on her way to becoming world number 1 and seems ready to occupy the position for some time if she stays relatively injury-free.

He has a fiery exterior and wears his heart on his sleeve, while she is calm, composed, and shows little except her occasional dry wit and humour in her press conferences. He is the anti-hero and seems to revel in it, an antagonist who seems to be misunderstood and can’t seem to do too much right off the court in a world that seems obsessed by Federer and Nadal, while her fans and adulation off the court continue to rise spectacularly. He comes from a torn and war-ravaged country and has the eastern European ‘in your face’ attitude whilst she prides herself on her Japanese and Asian roots that define her character and personality which is almost deferential and non-confrontational. 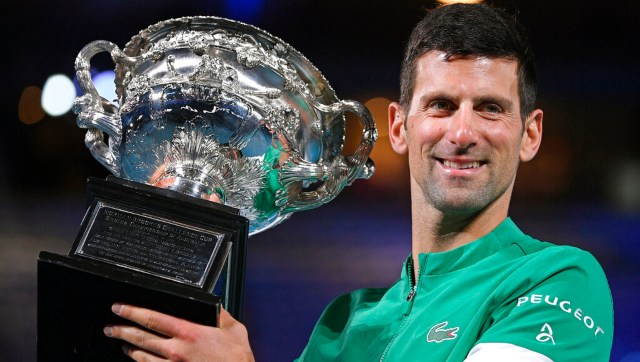 At the tournament, Djokovic struggled with an abdominal injury which got more reams of newsprint across the globe than the matches he was winning. Nobody seemed sure if it was a tear or a strain (neither did he, or did he?) and he fought through the end of the first week by being on court more than he is normally used to and with opponents that he would have swept away in normal circumstances. He played a four-set match in the second round, needed a five-set win in his third round, a four-set win in the fourth round, and quarter-finals before hitting top gear in the semi-finals against Karasev and in the final against a red-hot Daniil Medvedev.

On the other hand, Osaka had just the one blip, being down match point in her fourth-round match against Garbine Muguruza, a finalist in 2019 and one of the ‘next gen’ stars in women’s tennis. She was dominant throughout the tournament including handing an embarrassing and one-sided defeat to her idol Serena Williams in the semi-finals. Serena looked dangerous herself especially in her quarter-final win against the current world number two Simona Halep and appeared on course to give Osaka and the 24th Grand Slam title a serious shot before being dismantled by Osaka. The 24th Slam will place her firmly at the top of the heap and will end all discussions on the greatest tennis player, man or woman, to have graced the game. However, I believe time is running out for her as the younger brigade is already starting to challenge and push her very hard. It is also clear that the 24th title is now hanging above her head like the proverbial Damocles Sword which has made her have some uncharacteristic breakdowns emotionally and mentally in the last few grand slams that she has played.

There were some standout and breakthrough performances with the biggest being Daniil Medvedev and Aslan Karatsev, both from Russia. Most tennis pundits (including yours truly) expected Medvedev to push Djokovic hard in the final. Medvedev has been playing like the best player in the world and had a 20-match winning streak going into the final on Sunday.

Medvedev’s game is as unorthodox as his attitude on and off the court and is an enigma to himself, his team, and his fans. He plays in an old-fashioned way, an artist of sorts who has endeared himself to the game’s purists. He hits his groundstrokes flat and hard unlike the vicious topspin that is now the norm. His game is gritty and lacks flair according to a lot of players and commentators, but he more than makes up for it with his huge serve and tactical plays which he changes abruptly and effectively midway through any match. Among the women, Jennifer Brady, Jessica Pegula, and Michela Muchova showed that they had it in them to trouble big names and they will be players to watch out for in the coming years.

While the event went almost without a hitch except for the five-day lockdown announced by the Victorian state govt in the middle of the tournament, the pandemic has raised some serious concerns about the immediate future of the ATP and WTA tours with many players leading the charge by asking some tough questions of the ATP and WTA. The spate of injuries in Melbourne has clearly shown that the lack of good and continuous preparation due to the lockdown has hurt the players, both literally and figuratively.

It is imperative that the ATP/WTA and the players get together and take decisions keeping the best interest of the players, organizers, sponsors, and spectators at heart. However, given the fractious relationship between the ATP and the players, that’s going to be easier said than done.