Suryakumar Yadav, Ishan Kishan and Rahul Tewatia – three of the standout performers from IPL 2020 – earned maiden national call-ups as India announced their squad for the five-match T20I series against England in March.

India made six changes to the team that was used for their last assignment, a 2-1 series win in Australia in December: Sanju Samson and Mayank Agarwal lost their spots in the squad, while Jasprit Bumrah was rested; Ravindra Jadeja, Mohammed Shami and Manish Pandey remain sidelined by injuries.

Rishabh Pant was recalled to the T20I squad after having been dropped for the Australia tour, while Bhuvneshwar Kumar makes a return to international cricket after more than a year.

Less than eight months out from a T20 World Cup on home soil, which will also be the first of two World Cups in the span of 12 months, what does the team composition tell us?

The key takeaways from India’s 19-man squad for the T20Is against England – a five-match rubber to be held at the newly-built Motera Stadium in Ahmedabad, starting 12 March.

SKY gets his chance to fly, at last

Selection calls not being received well are commonplace in Indian cricket, but few omissions have been met with a wider sense of collective dismay than Suryakumar Yadav’s from the squad for the Australian tour – picked while he was at his stroke-filled best for Mumbai Indians during last season’s IPL.

Yadav was the seventh-highest run-scorer in IPL 2020, with 480 runs – 32 runs per innings, at a healthy 8.70 runs per over. Of the ten batsmen to finish with 450 runs in the tournament, only two scored faster than him. Since the start of IPL 2018 – when he was reunited with his hometown team – Yadav has scored 1416 runs at 32.18 runs per innings and 8.18 runs per over, hitting 10 fifties in 44 innings, and crossing the 400-run mark in each of the three seasons. The only batsmen with more runs in the IPL in this period are KL Rahul, Shikhar Dhawan, Rishabh Pant and Virat Kohli.

It isn’t limited to IPL bursts, either.

And that makes him a standout performer – not just in India.

Globally, among the 42 batsmen with 2000 runs in T20s since the start of 2018, only eight have a better scoring rate than Yadav’s, and the only men with more runs at a faster clip are Aaron Finch, AB de Villiers and Kieron Pollard.

That’s elite. That’s deserving of a national cap. Go on then, Mr Yadav, touch the sky!

How many anchors does it take to screw a T20 lineup? Despite what the match results might suggest, we were coming precariously close to finding that out with the way the Indian T20I setup was being assembled.

Rahul, Kohli, Iyer and Manish Pandey – four of the seven out-and-out batting options selected for the tour – made the trip to Australia on the back of an IPL season where all had strike rates under 130 (in all, only seven batsmen finished IPL 2020 with 350 runs at a strike rate below 130).

8.50 runs per over is what you would typically consider par for T20 batsmen, and quite worryingly for India, none of their regular T20I top-order picks – think Rohit, Rahul, Kohli, Dhawan, Iyer – have met that mark over the last two years. With a minimum of 500 runs and 25 innings, the five fastest-scoring Indians in all T20 cricket since the start of 2019 are Hardik Pandya, Rahul Tewatia, Sanju Samson, Suryakumar Yadav and Devdutt Padikkal; finally, India have a T20I squad where scoring rates are being rewarded.

In the same period, no Indian with 100 runs in T20Is has scored at nine per over or better.

This is a welcome correction of a troubling trend.

The last time an Indian T20I squad was picked, things were falling apart for Rishabh Pant and finally coming together for Sanju Samson.

Pant had endured his worst IPL campaign by a distance, returning less than 25 runs per innings at just over a run-a-ball – down from nearly 40 runs per innings at more than 10 per over in the two preceding seasons. He had fallen out of favour with the selectors, and appeared way out of sorts, physically and mentally.

Who would have imagined then that a dream upturn in Test match fortunes would pave the way for Pant’s limited overs return? Brimming with confidence after his exploits at Sydney and Brisbane, back to his cracking best in front of the stumps and chirping best behind it, he’s back. 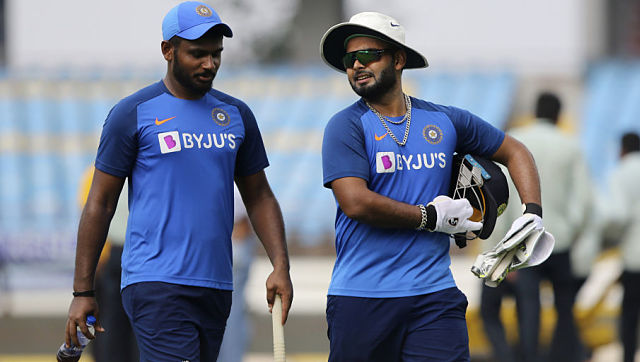 And despite the blip in the UAE, he does remain a gun T20 batsman; Pant’s career scoring rate of 9.00 per over is bettered by only eight batsmen with more than 2500 runs in the format.

Now consider Samson, picked above Pant for the series in Australia, largely for his sustained scoring – Samson made 26.79 runs per innings to Pant’s 24.50 during IPL 2020, but he scored at 9.53 per over compared to Pant’s 6.84.

He carried that intent with him from UAE to Australia, and revealed after the tour that his batting method during the series was signed off on by the management. Sadly for him, the ‘bare’ numbers have seen him lose his spot.

Samson scored 48 runs from three innings, at 8.47 per over. Nothing remarkable there.

The presence of three spin-bowling all-rounders – each of a different spinning variety – is an indication of the direction the Indian team is looking in ahead of a big phase in the format.

India’s ideal balance, it would appear, involves three seamers, including Hardik Pandya once he’s fit to bowl, and three spinners – two of whom, preferably, double up as all-rounders. That would mean six bowling options, and batting resources up to number eight.

Ravindra Jadeja, at the moment, is the frontrunner for the first of the spots for the spin-bowling all-rounders – especially given the marked levers in his batting in the format off late. 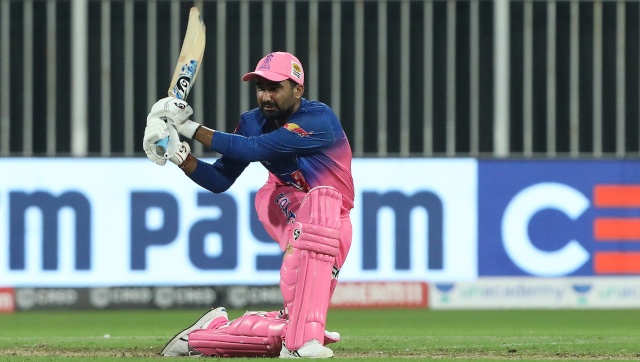 Of the three candidates in the fold for this series – Washington Sundar, Axar Patel and Rahul Tewatia – Sundar is probably in the lead given his greater experience playing T20Is, where he’s been an efficient Powerplay-bowling option while not getting too many chances with the bat.

Patel, who will seek a first T20I cap since February 2018, has better batting returns in the format, and remains a similarly frugal bowler (career T20 economy 6.83 to Sundar’s 6.61). But his biggest challenge is that you wouldn’t imagine India carrying two left-arm spinners in their World Cup squad.

Tewatia, unlike the above two, presents a more batting-heavy option, evidenced by his career scoring rate of 9.02 per over. His skiddy leg-spin can be handy too – Tewatia concedes just above seven an over – but he’s not a lock-in for four overs, unlike Sundar and Patel.

Ideally, India should find a way of playing two of these three in each of the five games.

Bhuvi is back, at long last

On Saturday, the day of the squad announcement, Bhuvneshwar Kumar returned figures of 10-2-35-1 in Uttar Pradesh’s opening game of the Vijay Hazare Trophy against Karnataka. Nothing major there, aside from it being his longest spell of bowling since the 2019 World Cup.

Bhuvneshwar’s last appearance for India came in December 2019; since then, he’s played four matches in the IPL, four in the Syed Mushtaq Ali Trophy, and now this Vijay Hazare Trophy opener. Injuries, however, have been a recurring and plaguing factor. Bhuvneshwar’s death overs economy in the IPL used to be a remarkable 8.77 up until 2017; since the start of IPL 2018, that figure has gone up to 10.30.

It should be interesting to see this rehabilitated version, and how well he holds up – if it’s anything like the Bhuvneshwar of old, it’s going to be a big boost to the shape of India’s eventual World Cup squad.