Defending women’s singles champion Sofia Kenin was knocked out of the Australian Open 2021 on Thursday after losing in straight-sets to Kaia Kanepi.

The 22-year-old American first Grand Slam title defence came to an end with 6-3, 6-2 defeat in the second round.

After her first-round win, Kenin talked about how nervous she was as the defending champion at a major for the first time.

Against Kanepi, she looked it. She was near tears during a changeover toward the end of the match.

The 65th-ranked Kanepi was hardly an underdog: she had beaten Kenin in their only previous match and is a six-time Grand Slam quarterfinalist. The Australian Open is the only Slam where Kanepi has not reached the quarterfinals.

The fourth-seeded Kenin only had 10 winners in the match, while committing 22 unforced errors.

Meanwhile, No. 1-ranked Ashleigh Barty advanced to the third round despite stumbling a bit in the victory over fellow Aussie Daria Gavrilova.

Barty blew a big lead in the second set and survived a shaky tiebreaker to beat Gavrilova 6-1, 7-6 (7).

Barty is trying to become the first Australian to win the women’s title at Melbourne since Chris O’Neil in 1978.

Barty lost only 10 points in the opening round, and her match against Gavrilova was equally lopsided until the wobbly finish. She led 5-2 in the second set but was broken twice serving for the victory.

The two friends then shared a hug at the net.

“When you play another Aussie, rankings go out the window, experience goes out the window,” Barty said. “Typically you know each other so well. It’s always going to be a tricky match.”

Rogers reached the third round at the Australian Open for the first time by beating Olga Danilovic 6-2, 6-3. Rogers, 28, came into the tournament with a career record of 1-4 in Melbourne, but her ranking and fortunes have been on the rise of late. 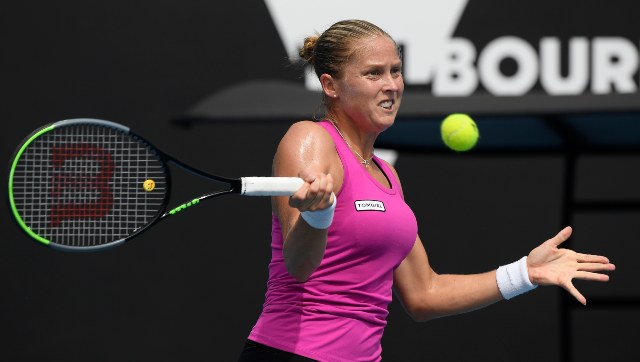 She reached the quarterfinals at the U.S. Open for the first time last September, and her year-end ranking was a career-best No. 58. Rogers was sidelined for 14 months by a knee injury sustained in early 2018, and her ranking at the end of that year was 780th.

She had little trouble with Danilovic, a qualifier from Serbia ranked 183rd. The small crowd on Court 3 included Novak Djokovic, who sat behind the baseline shouting encourage to his fellow Serb.

Pliskova, seeded sixth, advanced by beating American Danielle Collins 7-5, 6-2. Pliskova lost serve twice in a seesaw first set but pulled it out and then pulled away to beat Collins, a 2019 semifinalist at Melbourne Park.

Pliskova has won 65 matches in Grand Slams but is still seeking her first major title. She was runner-up to Angelique Kerber at the 2016 U.S. Open.